Every year Ron and I try to take a vacation to a warm, tropical locale.  Because of Ron's work schedule it's just worked out easiest to go in January.  So each January we get ready for a break from the cold, gray days that winter in West Michigan keeps us trapped in for the season.

Our January getaways are technically a combination of both of our birthdays, Christmas and our anniversary gifts to eachother.  We even further justify it for our anniversary as we've never actually spent an anniversary together (gasp!) as it usually occurs when Ron is out of town for work.  Although this year we set a new precedence; he was actually home on our anniversary!  Although he did have to leave that day...at about 4am.  Needless to say my eyes were unable to open at that time so I still have yet to see him on our anniversary.  However, it happened to be Ron's lucky day as he was able to see me in all my 4am glory.

﻿﻿To make a long story short, we were suposed to meet up with friends of ours that are currently cruising.  We planned to fly into Staniel Cay, meet up with them and sail the clear, blue waters of the Bahamas with them for 10 days.  Unfortunately, that was not to be as our friends suffered a bit of a set back that you can read about here.  We're just glad they're okay!  But 'the incident' required us to change our plans and as changing charter flights and airline tickets would have resulted in some hefty fees anyway, we decided to stay at the cute cottages that are part of the yacht club on Staniel Cay.

We flew to Ft. Lauderdale and hopped on a charter flight to take us to our final destination.  As we neared the shallow, turqoise waters of the Bahamas we began to see more and more white specks on the water.  Immediately I knew they were sailboats.  I couldn't help but think that someday that tiny white speck will be us.  And at that point there was nothing more that I wanted to do than to get our boat in the water, raise the sails and start getting acquainted with the newest member of our family.  ﻿

﻿
﻿ ﻿ ﻿ But since the boat was stuck in the very back of a very large indoor storage facility in northern Michigan in the dead of winter, I decided to just enjoy the here and now, which was a bit of paradise in itself. The warm sun and clear water immediately put me in a state of relxation. One of the key perks in staying at the Yacht Club was also having our own 13ft Boston Whaler to use everyday, and even better, gas was INCLUDED in our package! We had a lot of islands and deserted beaches to explore in a short amount of time! Not to mention we still had to find time to snorkel Thunderball Grotto and visit the swimming pigs of Big Major Cay. Nope, we had not time for relaxing, we had places to explore! Well, truth be told, we managed to squeeze in a lot of both. 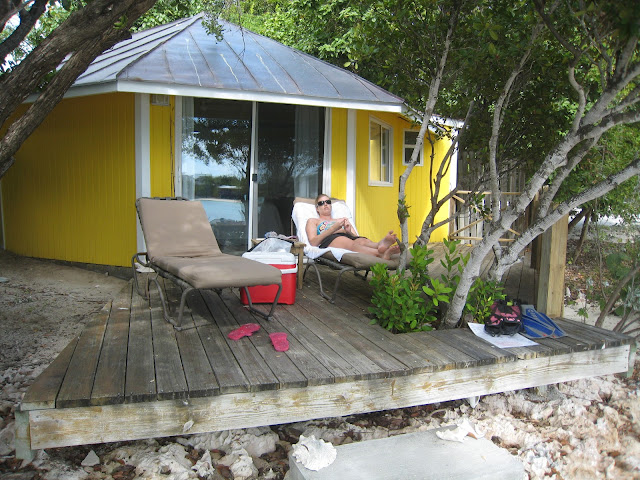 We made the most of having our own boat and started exploring right away.  Thankfully we had a map from the Yacht Club that showed all the cays nearby.  Without that map and Ron's good sense of direction, I would have had us doing circles for hours, or winding up in the middle of nowhere with no gas.

At first the number of deserted, pristine beaches was a little overwhelming, how do you pick one from another?  We solved the problem by stopping at most of them for short periods of time to fish and explore.  The sand was the softest I'd ever felt, it almost reminded me of extremely fine brown sugar...accept it wasn't sticky and while I didn't try it I'd be willing to bet it wouldn't taste as good either.  The water was so clear you could see stingrays and nurse sharks from a ways away and have plenty of time to get a closer peek at them.  The water was deceivingly deep.  We anchored by a reef to do some snorkeling in water that Ron thought would only be about 10 feet deep, when he dove down to check the anchor he discovered it was more like 25 feet.  Even at that depth you could see the purple fans swaying in the slight current from the surface, especially when the sun caught them.﻿﻿
﻿ ﻿ 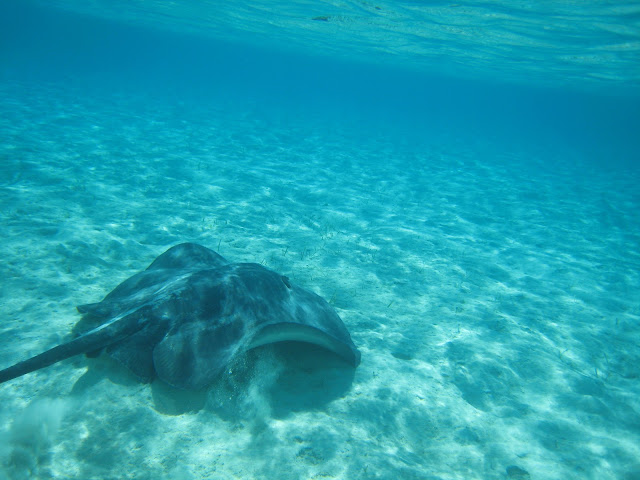 ﻿ ﻿
﻿ ﻿ One afternoon we took our pick of the bikes available at the yacht club and took a little tour.  Mine had two different colored tires, no handlebar grips and a loose seat that would move a little more in wrong direction with every bump.  Ron's little gem had a frame made from a hodge-podge of random colored metal, a faulty kick-stand and handlebar grips in the middle of the handlebars.  Although not real pretty, or comfortable, they served their purposes and took us down every street on the island.  We saw churches, schools and even the infamous Blue Grocery Store.  We also took some less traveled streets to make it out to Pirate Trap Beach on the north end of the island.  The beach sits in a nice little lagoon that borders the coral cliffs on the west side of the island and at the time of our visit the wind had caused a build-up of monster waves that were crashing against the coral cliffs, sending a refreshing sea spray over our faces as we explored the rocky shoreline.  What a difference in scenery a sketchy short bike ride can make.
﻿﻿
﻿ ﻿﻿

After talking to people in the bar and figuring out the high/low tide schedule, Ron and I decided to go to the Thunderball Grotto at high tide.  As a lot of people prefer the ease of entering the grotto at low tide, we had the entire place to ourselves to explore.  We strapped on our fins and put on our masks and dove in.  Admittedly, it's a little unnerving swimming underwater into a cave that you've never been in before.  Ron, being more than half fish, went right in to check it out and find the best place for me to go in.  After finding the best place I took a deep breath and went for it. Wow!
﻿﻿﻿
﻿ ﻿ 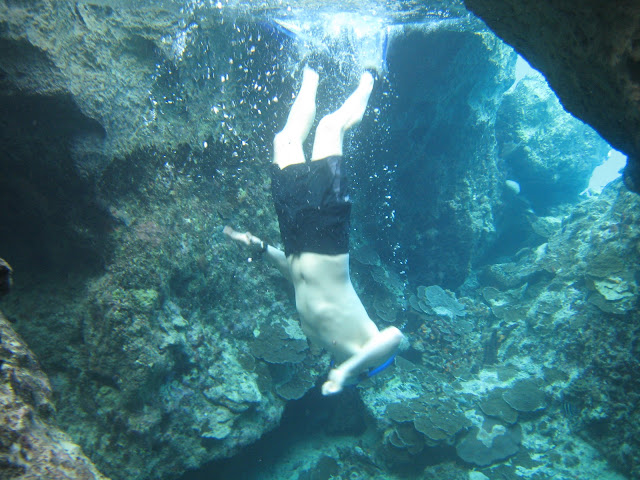 There were quite a few crevices and alleys to explore around the grotto as well.  All covered in pretty coral and usually with various fish swimming around them.  It was in one of the narrow alleys with a tight squeeze that I must have gotten too close for comfort of some small creature.  As I was making my way through a narrow part of the rock I pushed off the edge so as to not hit my hip or knee as I was snorkeling, as I did I felt something bite my finger!  Well, "bite" might be a bit dramatic.  Maybe "nibble" would be a better term.  If you've ever had fish nibble on your feet, it was similar to that except a bit more forceful.  It didn't hurt in the least, but it startled a yelp out of me and had me swimming faster than Michael Phelps back out into the open water.  I never got a view of the nibbling culprit but did see Ron roll his eyes at me after seeing my reaction.
﻿﻿ ﻿
﻿ ﻿  ﻿﻿ 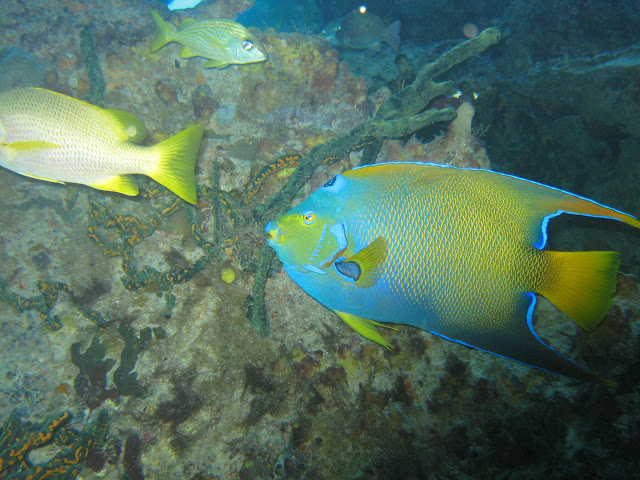 Throughout everything that I'd reard about the swimming pigs on Big Major Cay, I'd never heard anyone mention how HUGE they are, as in 300-400lbs a piece.  The first time we pulled up to the shallow waters off the beach, there weren't any pigs right on the beach but a few short seconds later I saw these massive animals emerge from the brush and run into the water.  They came right up to our boat and we started throwing food out of our boat.  Although not aggressive, they sure weren't afraid to push eachother aside to get the next piece of bread.  Every once in a while they'd get a little feisty and let out one of those God-awful squeals which would cause a moment of panic on my part.  But as soon as the food was gone they were swimming back to the beach for some more R&R.  What a life!
﻿ ﻿
﻿ ﻿ ﻿ ﻿ 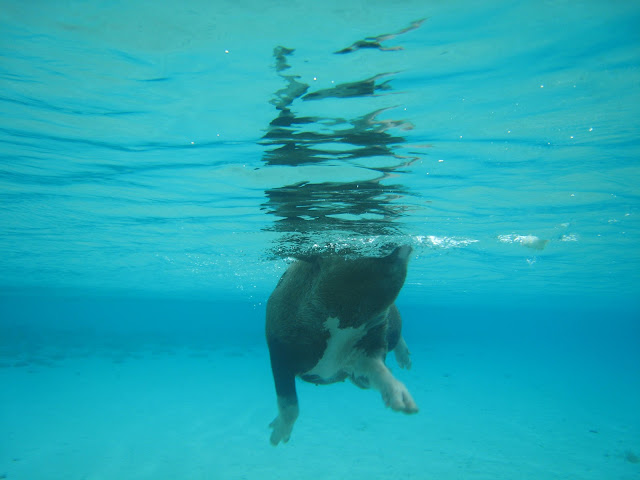 Next up was seeing the rare Exumas Iguanas on Great Bitter Cay.  As we pulled up to the beach we saw a single massive iguana walk out on the beach near us.  I was a bit creeped out as it just sat there at stared at us.  Maybe it's their unassumed speed, whip-like tail, massive claws or crazy perma-grin, but something about them gave me the willies.  Maybe it's the "Give me food or I'll happily tear you to shreds" look they all have.  Even though you're not suposed to feed them, clearly the fear of being torn to shreds is enough to bring out the inner rebel in people because these things wanted some grub.  So, of course, what did Ron want to do next?  Well he wanted to take an inland walk of course!  As we walked through the sparse, scrubby landscape you could hear the dried leaves being kicked up as iguanas only a couple feet from you retreated.  After the first dozen or so times of jumping at the sound, I got used to it and daresay I actually enjoyed our little walk.  At least until we got back to the boat.  At that point there were more on the beach, near our boat.  All staring.  All frozen.  All with that same deranged look.  As creepy as they were, they were actually quite pretty (from a distance) with their irridescent skin reflecting various colors in the sun.  And the best part is that there was no last minute Blietzkrieg attack on us as we got in the boat and took off.  Although I'm not convinced that the thought didn't cross their minds.
﻿
﻿ ﻿ ﻿ ﻿﻿ The rest of our time was spent doing some more sight-seeing, exploring and relaxing.  Hands down, this was one of my favorite vacations thus far.  Seriously, how many places will give you your own boat, fill it with gas, send you on your way with a cooler full of food and say "have fun!"?  In my experience; only this one.
﻿
﻿ ﻿ ﻿ ﻿ 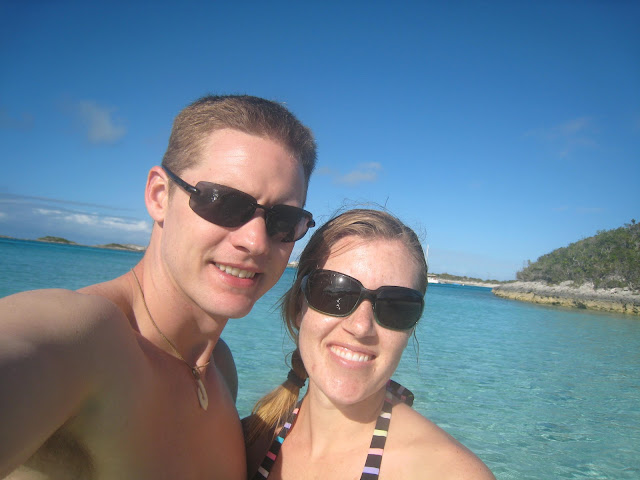