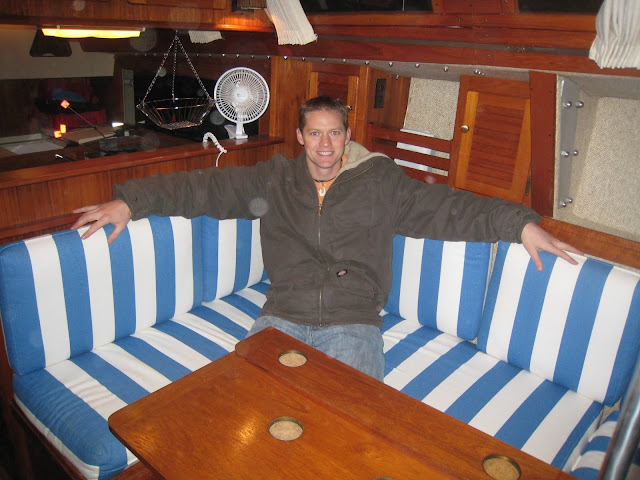 When we were in the first stages of contemplating the purchase of Hullabaloo, one of our first thoughts, besides being such a great deal for an even better boat, was that the name was a bit..."eh".  It seemed a bit corny...Hullabaloo...boat hull...not my favorite.

After talking about everything we'd need to do to change the name we thought it would be best to leave it as is for now until we got to spend some time on her and get to know her a little more.  After all, what really is the rush?

Shortly after Ron told me about the sinking of all three boats at his company that had sank after being renamed I started to seriously rethink renaming her at all.  Not that we're very superstitious people, but the idea just gave me the heebie-jeebies.

Then this weekend we attended our marina's "stuff sale" where people sell boat "stuff" that they no longer had use for.  The weather was 32 degrees and it was snowing and the sale was set up in an unheated storage building.  Not surprisingly, there weren't very many buyers or sellers present but in the end I think this worked in our favor.  We found a great cockpit table for $40 including all the hardware.  Considering that hardware alone can be well over $200, we quickly jumped on the deal.  The table is in great shape, but of course Ron has plans to do some upgrades...anything to give him the chance to play with fancy woodworking machines.  We'll be sure to post before and after pictures of his handy work.

﻿﻿ While we were there we started talking with some of the guys there about the different types of boats we all have and sailing in general.  One of them had been looking at the same model of S2 as Hullabaloo and in finding out the name of ours (the one he was looking at was a different boat) he started telling us about an old music show that aired in the mid 60s called Hullabaloo.  It was a music variety show that competed with American Bandstand.

Little by little, the name is starting to sound more and more appropriate.  Ron has been teaching himself to play the guitar (a bit of an obsession) and is also building a ukulele to play on the boat.  We also love to rock out to music while on the boat...you know, when we're not taking in the peaceful serenity of nature of course.  Hullabaloo is also a synonym for noise, racket and hubbub...all of which are pretty fitting for us...I just hope these terms don't apply so much to the boat :/

So for now, and most likely for good, we're keeping the name that she's had for a majority of her 32 years.  Looking forward to all the shenanigans that are sure to come!
Posted by Skelton Crew at 8:18 AM No comments: