Home is where the boat is

Well, we made it home! Ron and I, along with our friends Jerm and Angie, left Charlevoix on Friday morning and began our long journey.  After 26 hours of sailing, motoring and motor sailing  170 miles over four days we finally made it back to Muskegon.
﻿﻿﻿﻿

﻿﻿﻿﻿﻿﻿﻿﻿﻿﻿﻿﻿﻿This trip can be summed up in a single word: COLD.  Even though we had plenty of sun our daytime highs were in the low 50's and nights were as cold as 37 degrees.  Good thing we had heavy sleeping bags and blankets galore!

On our first leg we went from Charlevoix to South Manitou Island.  We sailed the majority of the way and had a little excitement when water was spotted coming out from under the stove, and not just a little water.  After sopping up the galley floor, we found more water coming in at a pretty alarming rate.  Although Angie was ready to abandon ship (which was quite entertaining...sorry Ang!), Ron started tracing the flow back to the source of the water.  After unloading most of the lazarette and following the water back behind it Ron found a broken connector that drains water from the cockpit drains out through the hull.  Since we were heeling on that side water was shooting in through the split hose from the lake.  After a quick-fix with electrical tape we were back under way with no more leaks!

We spent that evening doing a little exploring on South Manitou Island then spent our first night at anchor in the calm bay that we had all to ourselves.  Still can't get over how clear and clean this water is!  This place is definitely on our short list of places to revisit.
﻿

﻿
﻿
﻿﻿
We left South Manitou the next morning on our way to Manistee.  With the light winds we motor sailed most of the time.﻿﻿﻿﻿ 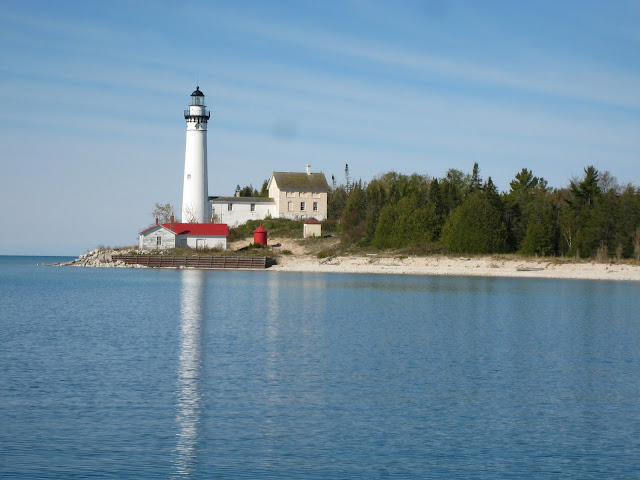 ﻿
﻿﻿
Naturally, since we had light winds Ron wanted to put up the spinnaker right away.  We let it fly for about 15 minutes but the unsteady winds made it a pain to deal with so we brought it back in, but boy did it look great while it was up!
﻿﻿

﻿
Our next stop was in White Lake.  We anchored and found our anchor light wasn't working, meaning now I'll have to hoist Ron up 50 feet to the top of the mast to check it out and fix it...he better be real nice to me that day.  We spent the evening playing cards, having dinner and enjoying some cocktails.  After dinner, and some more cocktails, Ron and Jerm thought it would be a good idea to shower in the lake.  Not the brightest bulbs in the box those two, but it was pretty funny watching them scramble back to the boat after hitting the water and having their breath taken away by the cold.
﻿
From White Lake we had a short 14 mile jaunt to Muskegon.
After sitting in storage for the last year and a half we couldn't believe how smooth the engine ran, even after all the motoring we had to do we never even had so much as a hiccup with our trusty Volvo...phew!  It was still cold, now cloudy and the crew all had bad cases of wind burned faces but we were finally HOME!

Next up: Get Lexie aboard, invite friends and family out and start having some fun!
Posted by Skelton Crew at 6:09 PM No comments:

After a year and a half of sitting on the hard Hullabaloo is back in the water where she belongs.  We barely managed to make it to the marina in time to catch her in the slings, which may be a good thing since seeing her hanging in midair was a bit nerve racking.﻿ 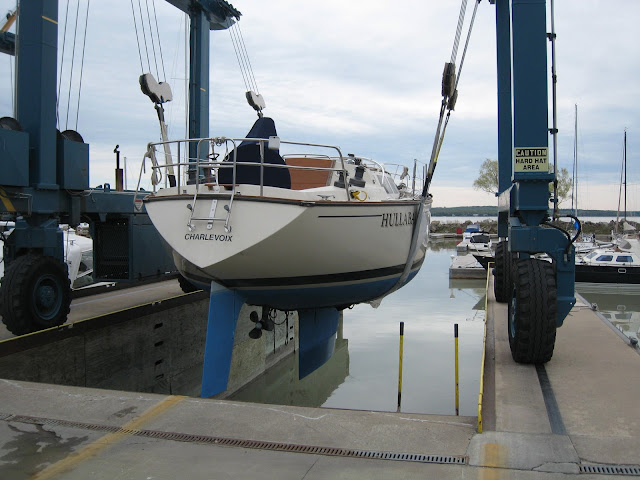 ﻿  Andy drove the boat just around the corner to where her rigging and mast would be put up.  Also just around the corner was a large barge that was dredging out the marina.  Due to record low water levels in the Great Lakes many places are having to dredge to make it deep enough for boats to be able to use marinas.  Not only were they pretty close to our boat but Ron made the mistake of telling me that the barge is being steered by the shovel on the excavator  and the hydraulic poles that are sticking up.  At first I was a little lot nervous but clearly this was not the operator's first day on the job, quite impressive maneuvering!
﻿
﻿
﻿
﻿
﻿  Due to the marina being extremely busy our rigging crew was down to one.  So naturally Mr. Hands-on jumps right in and starts helping.  Not only did it make the rigging go faster but Ron learned a lot too.  And I don't think our rigger was too upset to have the help either!
﻿
﻿
﻿  The staff at Irish Boat Shop were FABULOUS, seriously, I don't think I've ever met a more energetic bunch of people!! Every single employee was friendly, happy and genuinely shared in our excitement about getting Hullabaloo in the water. Our diesel mechanic Andy went above and beyond to show Ron the systems aboard, our rigger not only let us watch his every move but also let Ron help out, gave us great advice and answered every question we could possibly think of.  And from the first inquiry email we sent about Hullabaloo, our broker Jeff was there to answer questions (of which we had a LOT!) and guide us through the process of buying this GREAT boat.  After reading about a lot of not-so-pleasant experiences of buying a boat, we couldn't be more thankful to have had the experience we did.  So to all the staff at Irish...THANKS from the bottom of our (very happy) hearts!!
﻿  We had such a great first sail! It started out with 10kts of wind and got up to 18kts so we were able to move along at a pretty good clip and Ron was able to play nonstop.  I'm not sure the last time I've seen him so excited, he was running (not literally) all over; up on deck, trimming sails, looking at how to make some changes Jeff recommended, down in the cockpit playing with the autopilot...sheesh, I was exhausted just watching.
﻿
﻿
﻿ 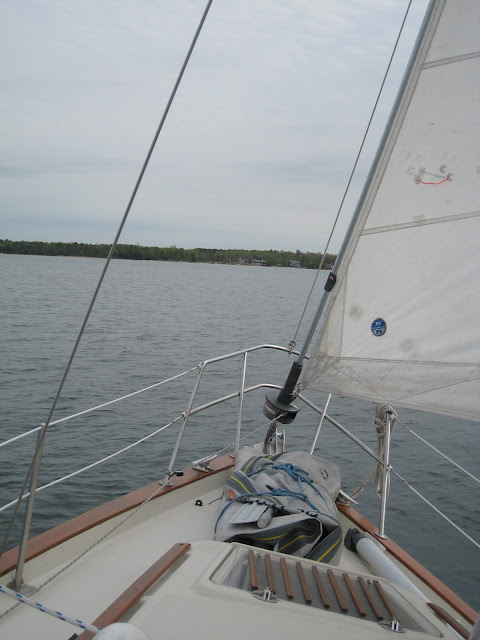 She's nice and cozy at the municipal marina where she'll stay for the next five days (not that we're counting) until we come back up with a couple friends and make the 180ish mile treck to Muskegon.  Let sailing season begin!
﻿
Posted by Skelton Crew at 6:19 PM No comments:

As of right now Hullabaloo will be going in the water on Friday! And if everything goes as planned (read: Ron gets home from work in time) we'll be there to watch it all go down.  We plan to spend the weekend, sans Lexie, doing some cleaning and organizing and getting settled in.  As long as all systems are working properly we'll also try and get her out for our very first SAIL on her.

We then plan to get the boat to her new home in Muskegon over Memorial Day weekend with the help of our friends Jerm and Angie.  I'm still a bit shocked that the time is nearly here after that long, cold, dismal winter that felt like it would never end.

Looking forward to views like these on Hullabaloo in the next couple of weeks! 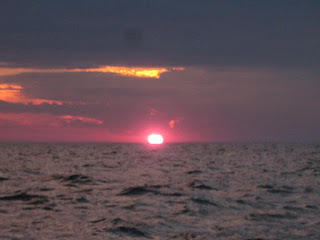 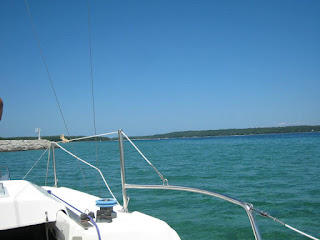 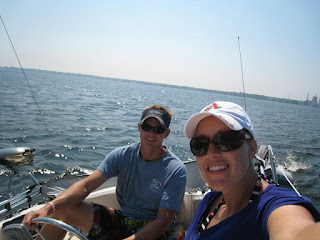 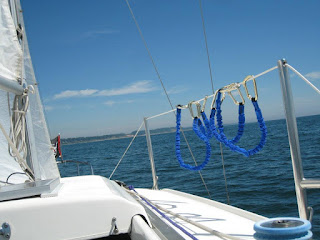 Posted by Skelton Crew at 10:31 AM No comments: