Ugh. This weekend was crappy! Cloudy and rainy with temps in the low 60s at the lake. Low 60s...in July. This is absurd! As this was the forecast for the entire weekend, we almost decided to not to not head to the boat at all. Then we realized there's things we still need to do before we take off for our 2 week cruise in Dorr County, WI next weekend.

We spent most of the day inside with Ron installing an automatic bilge pump and me polishing the teak. We then lounged around for a good portion of the day and  put off filling up on diesel and water as long as we could. On the way to the marina Ron noticed that we weren't getting a reading on our speed sensor. In order to check it out Ron had to remove the unit from the thru-hull, which basically leaves a hole. In the boat. Knowing what had to be done made me slightly nauseus so I did the only thing I could and grabbed the camera.
﻿ ﻿﻿

Removing the unit and putting in the dummy plug went pretty well. The hole didn't shoot a jet of water up to the ceiling like I imagined and we probably took on less than a gallon of water total. Phew! But I barely had time to appreciate the success of the swap because the second Ron help up the paddle wheel part that reads the speed I saw something squirming!! What kind of nasty, slimy critters are living under the boat!?!?  ﻿
﻿

These wiggly spazzes had clogged up the wheel messing up our speed readings. Apparently Ron gets these all over his wetsuit when he's working in the water at the nuke plants, but I had no idea these little nasties existed...makes me itch just thinking about 'em.
With that excitement over, we lounged some more. Ron got antsy and started messing around with  the fold-outs on the table while I gave him the side-eye for his enthusiasm over modeling the proper methods of contorting oneself on a boat. However, he forgot to take into consideration that most people don't have his long grasshopper legs and could easily fit in the space without too much issue. What a weirdo :)﻿ 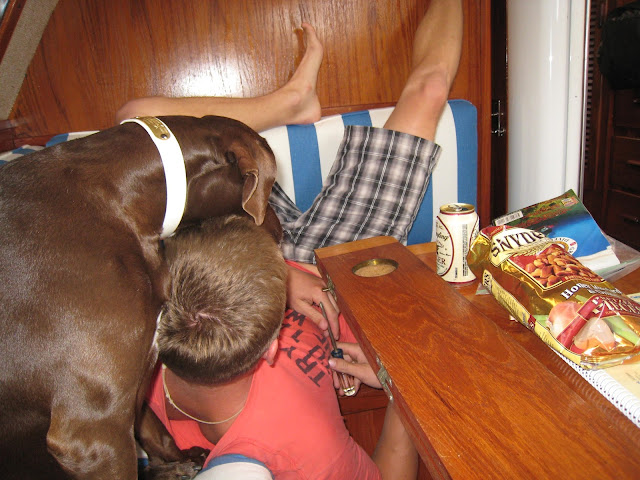 The forecast for Sunday called for more rain and with Ron having to leave for work on Sunday we decided to pack it up and head home Saturday evening. Also, did I mention that we have a golf outing that we help put together the day before we leave? No? I also probably didn't mention the fact that Ron is out of town for work this week so packing for the trip, buying all the food and getting the lawn mowed is up to me. On top of that, plans have to be finalized for the golf outing this week. It's going to be a busy week. Looking forward to a two week sample of the cruising life!
﻿
﻿
Posted by Skelton Crew at 4:47 PM