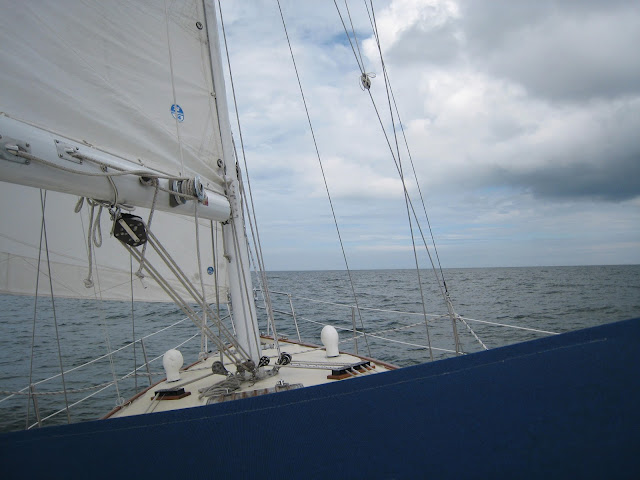 With the cancellation of guests for this weekend, we had a pretty quiet couple of days. It started of with a cool, bug-free walk through the State Park for some exercise. There's nothing like the gorgeous scenery and the smell of that fresh "up north" air to start your day! 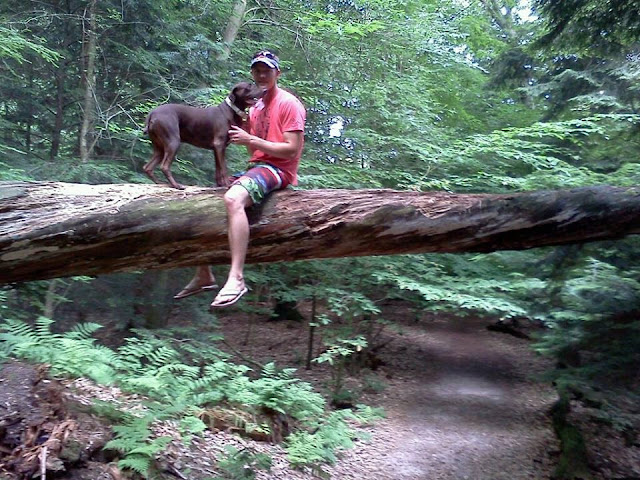 Our first sail found us in rainy/dreary conditions. I put on my foulies to stay dry and warm while the captain toughed it out in a t-shirt while sipping his coffee. With the building wind we were in 2-4 footers and while in the other boat we would have been tossed around pretty good, all we experienced was the fluid motion you'd expect to find on a sailboat. It was actually quite fun, a little bit like riding a roller coaster when we'd catch big one just right. Ron was having a blast at the helm, especially once the waves were big enough to start spraying the deck.
﻿ ﻿As we were coming in, the wind picked up from 15kts to around 20kts making for an interesting time getting the genoa (front sail) rolled up. After some good gusts, and bad steering (apparently) on my part, we got the genoa in and the main came down shortly after without any issue.﻿﻿ ﻿﻿﻿﻿We spent our first night at anchor since fixing the bad anchoring light bulb the loose wire connection at the base of the mast. Such a nice nite with a great sunset to boot. I managed to sleep better that night but since we were anchored instead of on the mooring my natural overreactive instincts thought it important to listen carefully for any sounds indicating that we were dragging anchor in the very light winds we had overnight...I think I should just give up on hoping I can ever get a good nights sleep on the boat. Which I'm totally willing to do. 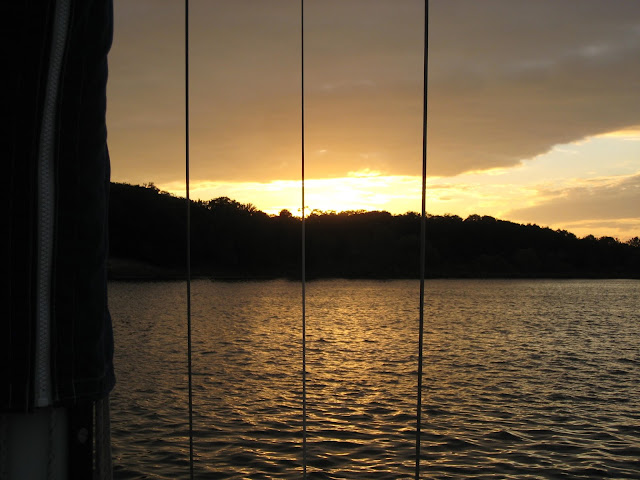 Sunday turned out to be sunny and warm! We went out for another great sail that I wish could have lasted longer. I even had my bathing suit on...while sailing...it's a miracle (and a first for this year)! We had sunshine, 10kt winds and 2 foot seas that were on the verge of lulling me into a sweet, sweet nap just about the time we started heading into the channel. Bummer. The rest of the afternoon was spent lounging (me) and swimming (Ron and Lexie). 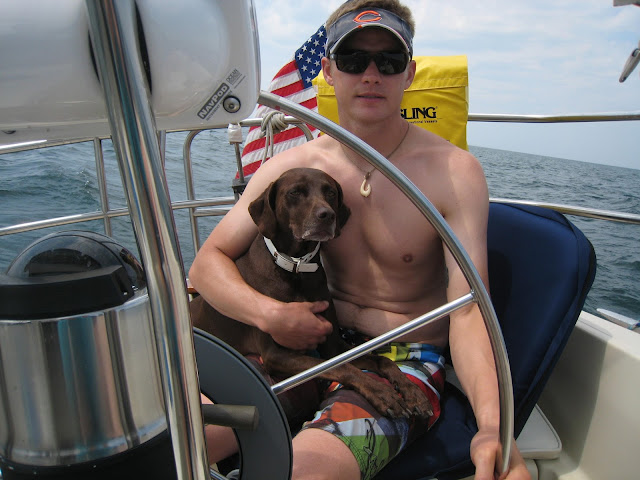 ﻿
Just so you don't think we didn't do anything productive this weekend:﻿ 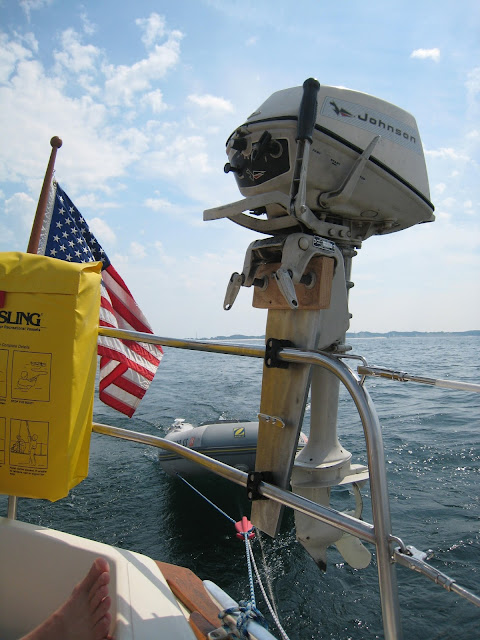 Ron put up the new motor mount he had made at a local company from some scrap stainless steel.  Since other motor mounts made from stainless can retail for well over $300 I think we did pretty well at $65. Plus, it could also double as a weapon if needed...that sucker is heavy!

Ron also changed the oil for the first time. Since we're not really sure when the oil was last changed (probably a year and a half ago) and we're planning a two week trip to Dorr County, WI in August we thought it would be a good idea to get it done and out of the way. I'm happy to report that all went smoothly and even though I complained about having to spend $70 on the oil evacuator, I'm glad we have it, it definitely prevented a lot of unnecessary sweating and swearing on Ron's part.

So really, maybe I didn't do that much this weekend aside from getting a slight sunburn. Oh,well, you'll have that sometimes I guess. Maybe next time. Maybe not.