I'm starting to get the 'Groundhog's Day' feeling about our anchor light...issues. We again had to make a night time run back to the mooring ball after we were unable to see our anchor light turn on this past weekend. Yeah, the one we just replaced LAST weekend was not working. Sigh. We have no idea why it would work for an entire night then not work the next weekend but it's getting old fast. Ron is currently trying to find out what the issue is, in the meantime, we may just put the original bulb back up since the only reason it wasn't working was because of the bad wire connection at the base of the mast. We're gettin down to the wire as we leave in two weeks for a two week cruise to Dorr County WI and if we don't have an anchor light we're really going to be in trouble.

But on a good note: We have a bimini! It was installed just in time to shield us from the HOT summer sun. We're still waiting on the connecting piece that zips in between the dodger and bimini (and really creates the most shade), which should be ready by this coming weekend. Now, instead of our cockpit being a human frying pan, it's now a shaded, cool oasis where we can sail, nap, read and eat without feeling like pieces of bacon sizzling in the sun. This is however, still room for sizzling on the deck if one so wishes. Plus, and this is Ron's favorite part, it has a handy window with a removable cover so you can still see what the sails are doing without having to move an inch!


While out sailing on Saturday we thought we were about to be stopped by the Coast Guard, which would be odd and pretty unsafe seeing as we were under sail and conditions were fairly rolly. One of their boats sped right behind us and we thought they might try pulling up beside us but instead they continued past and headed for the beach (although Ron really would like to be stopped to question them about our current gear and what else we should have aboard). 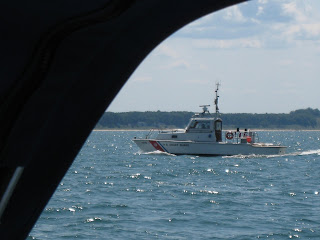 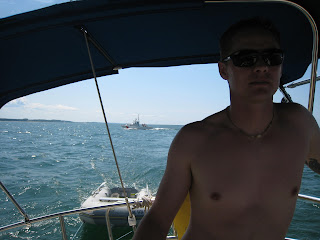 A few minutes later a Coast Guard helicopter started going back and forth over our boat. Out of curiosity we turned on the VHF to listen in on what might be going on. We were hoping they were just running search and rescue drills but it turns out they were searching for a missing 15 year old girl. They also had divers out looking for her as well and instructed boaters exiting/entering the channel to "be cautious and prepared to assist as necessary". Gulp. Then, just as abruptly as the boat and helicopter appeared, they were gone. We never heard anything more on how things turned out but the rest of our sail was a bit sombering. A good reminder that the waters of Lake Michigan, while beautiful and inviting, can also be dangerous and surprisingly powerful when you least expect it. 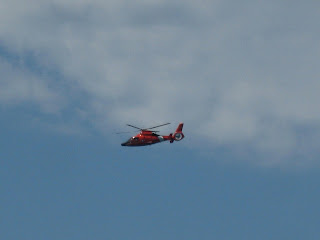 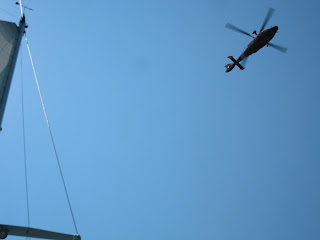