Sister Bay and a Grounding

We left Peninsula State Park with a quick stop in Sister Bay for a pump out, water and diesel then headed further up Door County with plans to go through "Death's Door" (the channel between the mainland and Washington Island-notorious for big wind), stop at Pilot Island to let the guys dive a wreck then make the short trip to Washington Island where we'd anchor for the night. Or so we thought.

Pilot Island is an abandoned island with a few remaining buildings that has been taken over by masses of birds. We'd heard that the island can be a bit rank, but it wasn't until we were completely downwind near the dive site that we began to gag. The island is covered with birds and even more covered with their...waste. Nasty. Thankfully, the guys decided that leaving us on the boat while they dove would be cruel and unusual punishment.
The grounding-So we pushed on to Washington Island where the channel got narrow, the waters got shallow and...we ran aground. To be fair, we tried to go around some guy dragging an anchor in the channel trying to snag something and our GPS said that we were still in the channel. This all happened to take place in front of the ferry docks as well. Great, an audience. The guy dragging the anchor just took off so we raised the mainsail in hopes of heeling us enough to take weight off the keel and be able to motor off the shoal. Just about that time a friendly fisherman came by and offered to help pull us back into deeper water. Ron thinks he wanted to fish where we grounded but whatever the reason, he helped and pulled us right out.

We continued on for about 30 yards before noticing that the entire channel and bay looked extremely shallow. The charts indicated the deepest part of the bay was 7-10 feet in the middle. We're not mathematicians, but knowing the lake is between 3-4 feet down and our draft is 5' 6" we decided not to push our luck any more and hauled anchor out of there. We didn't happen to notice until we were leaving that there wasn't another sailboat in the entire bay...here's your sign.

We were cranky by this point and just decided to head back to Sister Bay. We knew they had somewhere to stay and it was supposed to be a cute town that us girls wanted to check out, so back to Sister Bay we went. This worked out better for Jerm and Angela who were taking a taxi down to Green Bay the next day anyway.

Sister Bay-What a cute town! Just like Egg Harbor, there were a lot of stores and ice cream shops. We ate breakfast at Al Johnson's restaurant, famous for goats on the roof, and had some delicious Swedish pancakes. This place was great, it even had a cupcake store! I was in heaven...Cupcake Heaven. Except for the fact that we were there early in the morning and wouldn't be sticking around for them to open...very sad face. I even went into my very first Piggly Wiggly store in Sister Bay. For the longest time I thought it was a fake chain name used in the movies, I can now assure you it isn't.


Even though Jerm and Angela had to jump ship in Sister Bay, it was a great week having them aboard and we're so glad they could be with us for our first crossing milestone. ﻿ 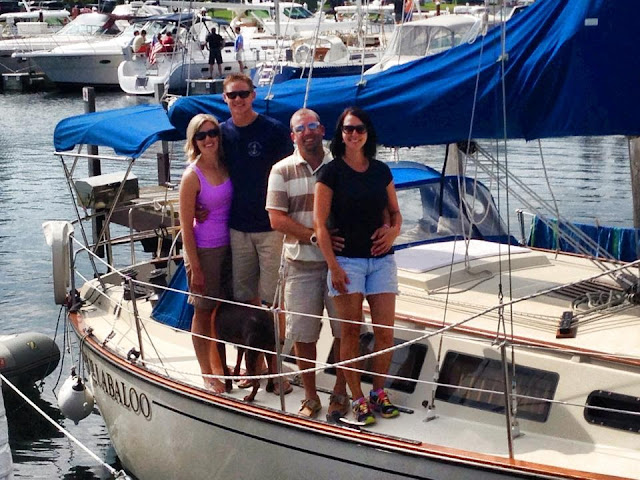