Classin' Up the Boatyard 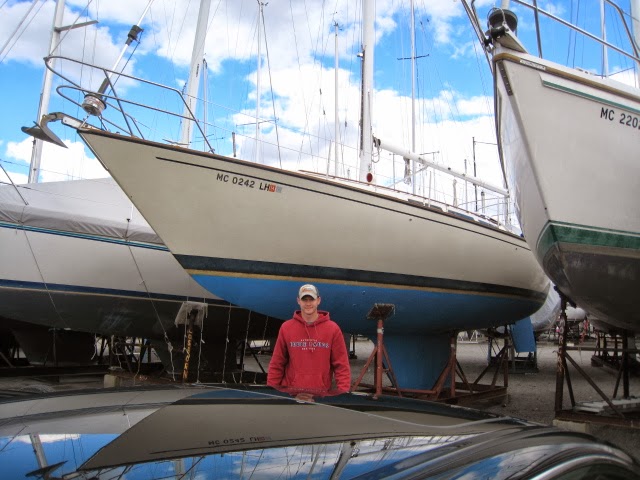 ﻿ Ron was able to come home for 36 hours this weekend, which meant one thing: Finish closing up the boat.  With iffy weather predicted, we headed to Muskegon with the goal of winterizing the engine, removing the batteries and making sure the boat was good for the next month or so until we'll be able to check on her again.

We'd been talking about how to handle covering HB for the winter, including if we were going to do it at all.  The weather was 47, rainy and windy and I thought for sure we'd just hold off on it.  But then the sun started to come out, it warmed up (a little) and we decided to just do it, it might not be pretty but it would be covered.  The lady in the ship store told about a good place to get heavy duty tarps, so off we went for tarps and supplies.

We just kind of made things up as we went, cutting slits in the tarp to get around the rigging and stanchions and using a LOT of duct tape.  We're hillbilly like that.

We got caught in a pretty good storm, hail included.  As you can imagine, this sparked a flurry of inappropriate language, but we kept on pluggin' along.

In addition to our duct tape party, we used lots of line to keep the tarps as close as possible to the boat, hopefully stalling the wind a little bit from tearing them apart.

Looking around the yard, we noticed that boats either didn't have any covering on them or they had nice, custom built canvas covers.  We've never been people to go with the flow so we proceeded with our genious plans.  Nevermind the fact that custom covers, or even shrink wrapping, is not in our budget.  Afterall, if the tarps don't survive the winter (which we highly suspect they won't), we'll only be out $60.

﻿ ﻿
None of our hatches or vents leak that we've seen, so if the tarps do happen to disintegrate we shouldn't have any major issues but I do feel a little bad that we're the first of her owners to subject her to outdoor storage for the first winter....ever.  I'd like to think that the tarps will help, but I have a feeling that this will not be the case.  Sometimes you just can't win.


﻿
﻿It's not pretty, but it's done!  It should help, to some degree, with some sort of weather protection.  The future will tell just how much.  I think, if we choose to do the same next year we'll opt for smaller tarps.  Obviously cutting the tarps makes them more apt to tear, especially as the wind gets ahold of them.  I think it would just be better to get smaller tarps and tie them down good and tight.  Plus then we wouldn't need so much duct tape, which will not hold a lick anyway.  We're just hoping the ropes tying it down will help too.  Live and learn I supose!
Ever since we managed to ground ourselves at Washington Island, I've been wondering what the keel looks like.  Now I know.  Considering the bottom was full of rocks it's not bad, just missing a little paint is all...thankfully!﻿
﻿
﻿
Next time we're at the boat we'll be taking home some interior cushions to be reupholstered as well as the companionway stairs so we can refinish them.  Baby steps...
Posted by Skelton Crew at 10:55 AM