We finally got up to see the boat this weekend.  With the nasty storm we had a couple weeks ago with 60-70mph winds, I didn't have high hopes of the what we'd find.  So imagine my surprise when we pulled in and saw this:
At first I thought the tarp had ripped, at which point I though saving the tarp would be a real pain, but it turned out that some of our strategically placed duct tape gave out.  Not bad for getting flogged by tornadic winds!

Ron also decided that since we were there checking stuff out, it might be a good idea to take the tarp that was on the hull and roll it up.  We'd gotten some comments about how moisture trapped between the hull and the tarp could cause blisters to form.  Why risk it?  So we rolled up the tarp and, using very conspicuous red duct tape, secured the tarp at the toe rail (rolling it under the existing rope that was tied to the stanchions).  In case you were wondering if it now looks any less hillbilly, I can assure you, it doesn't.  But then again, any other way just wouldn't be our style. 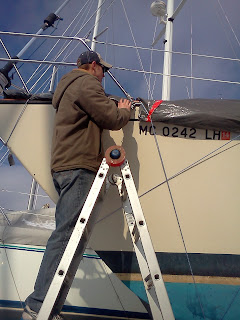 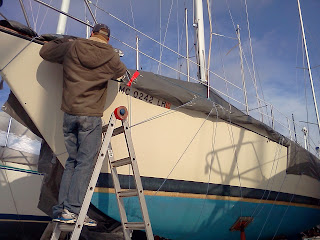 Ugh, now that the tarps are up you can really tell how much she needs a good waxin'! I just wish that was the most embarrassing part of this outfit - but I think the red duct tape has it beat.