We Survived the Bottom Job! Barely.

You'd think with all the little projects, in addition to the big ones, that we've been doing that I'd have more to write about but really, you don't want to hear about every little thing we're doing. Moving our underwear around multiple times to figure out where we want them just isn't that interesting. Plus, finding the time is a lot harder than I thought it would be. I finally understand what everyone means when they say they don't know where the time goes!
Four days and 26 hours (each) of sanding later, it was time to start putting paint back on the boat. Woohoo!! Except now all I can think about is how much time it would take to take off even one roller worth of paint. But it has to be done, we certainly can't leave with no paint on the bottom.

With the recommendation from Matt and Jessica of MJ Sailing, we opted to go with Pettit's line of paint; the Protect 2-part Epoxy Primer and Trinidad SR for paint. This paint and primer will not only protect HB's bottom for multiple years, but it also provides protection in saltwater, freshwater and anything in between that we'll be running in to. It sure wasn't cheap, but it will pay off in the long run! 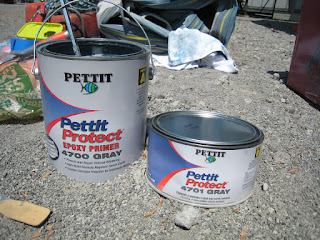 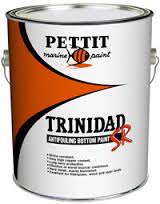 We got the hang of mixing the epoxy primer pretty quickly and eeked one full coat out of each gallon. Four coats in 3 days, pretty easy really. Although I may be a bit biased at this point.

The paint was another story. Let me tell you, this stuff is some heavy paint! And when we opened the cans we found a solid mass of cuprous oxide seriously stuck in the bottom. We emptied some of the liquid into another bucket to give us some room to dig in and even then it took us a solid 30 minutes of hard digging to get it loosened. The paint mixer on the drill helped out a lot too. Then we had to use a 3/16" roller. Ever used one? No? Oh, well they hold like zero paint. So you have to constantly put more paint on the roller and then you can cover a whopping 3 feet. In fact, I tried rolling for a while but Ron took over because I was going too slow and the roller was getting a little 'chunky'. I probably don't need to tell you that a chunky bottom is not a pretty sight.

It may not have been pretty at every step of the way, but it's done.done.done! And now we've really got some sweat equity into our lovely Hullabaloo!
Okay, so it's not completely done...we still have to sand, prime and paint the spots hiding under the cradle stands. BUT, with any luck at all, we'll take care of those next week right before we launch!
Posted by Skelton Crew at 4:00 AM