We are officially cruisers! After some last minute...'details', we managed to get it together enough to leave on our pre-chosen date...pretty good (and lucky) in my book :)

Last night at our dock party we got to say one last goodbye (for now) to most of our closest friends and family, but even then, it still didn't quite seem real, I knew we were leaving the next day, it just wasn't sinking in.

Then today a few people stopped at the dock to wish us well, both those we had met before and some that we hadn't. I loved hearing their excitement and support for us, very reassuring as we were just an hour or two from shoving off. On our way out to the channel we had some friends follow us out and give us an air horn send-off while others were hooting and hollering from their boat with excitement. It gave me chills and almost had me a little choked up. It was right then that it hit me of what we are actually doing and it took me a little by surprise I guess. I'm actually quite surprised I didn't have a meltdown on the way out, I thought for sure I would! 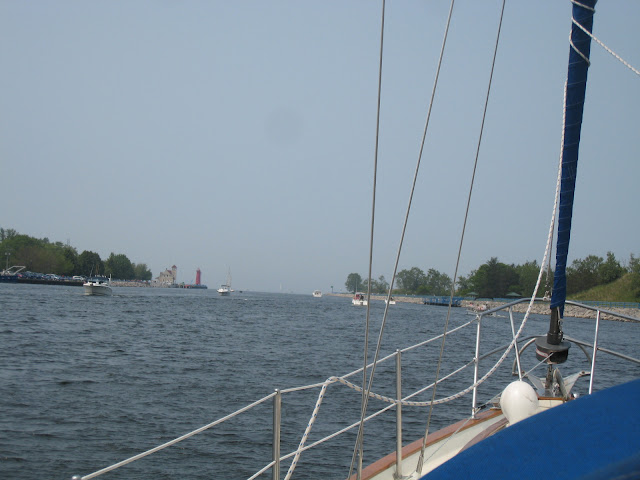 We got out to the lake, the temp dropped about 10 degrees and we immediately were swallowed up by a wall of fog. And we managed to make it a whopping 10 miles for the day. I would have liked to have gotten a bigger start on our first day but winds were only 4-7kts and it was foggy the whole way, no burn-off like we'd been hoping for. We were extremely grateful for our radar, we were able to track the boats we could hear but not see and it also allowed us to let our buddy boat know what was around him as he didn't have radar. We had a couple boats come flying by us pretty closely a couple times....pretty freaky when you can hear them, see them heading at you on radar but not see until they're a hundred yards from you. We see them but do they see us??? Moving at 2-4kts we weren't really in a position to perform any speedy evasive maneuvers.
But even at our dismal speeds, we sailed the whole way. I was a little surprised Ron didn't turn on the engine...but then again we're cruisers, we aren't in any hurry!

A pretty good start to our new lifestyle I'd have to say! 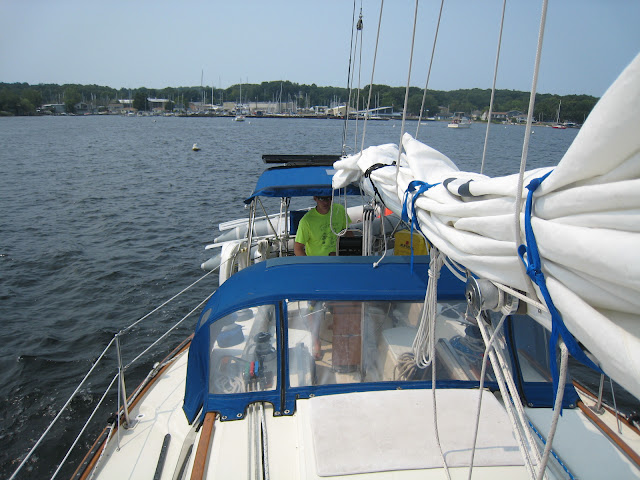