I can't tell you how many times I've heard cruisers liken their dinghy to a car and, although it's not my favorite analogy, it's so true (I don't have another analogy at the moment - ha). It really is our lifeline to shore, which we still want/need to get to regularly, dependably and in a timely manner!

Okay, we had a dinghy. And it floated and putted around just fine if you don't mind putting some air in it every day or two. Then we found a fantastic 8hp motor on Craigslist and couldn't pass up the deal. Our 5hp motor was my Grandpa's and although it worked perfectly (kept in pristine condition) and we could have taken it with us, I really wasn't keen on the idea of taking his pristine motor in a salty and abusive environment. So we got the new motor, strapped it on the dinghy and proceeded to ride around on it at lightning speed, at least compared to what we could do with our little 5hp. Then one day we happened to notice that the transom was quite literally splitting apart from the additional weight and force of the new motor. Yikes.

We knew we would need a new dinghy when we got to Florida anyway as our PVC dinghy wouldn't stand up long in the ridiculously strong sun down south. Now we needed a new hypalon dinghy...in the north. We called around to numerous marinas and nobody had hypalon models in stock, with our short season and comparatively mild sun rays there isn't a big demand. Especially when hypalon is more $$$.

We found a deal on Defender for last year's model and after many calls trying to work out where we could meet the dinghy and who there would accept and unload the freight delivery, Mackinaw City was it. The Municipal Marina happened to be right next to Shepler's Ship Store, one of the big Ferry operators for Mackinac Island. The delivery was supposed to be there on Friday but ended up not making it until Monday. So we splurged for 4 days in the marina. Even if there were anchorages near by we would have stayed at the marina, the ferry traffic and the waves they kick up is insane and I can't imagine rocking and rolling and fighting the wind in the straights for even a day. However, after four days we were ready to get on the move again! 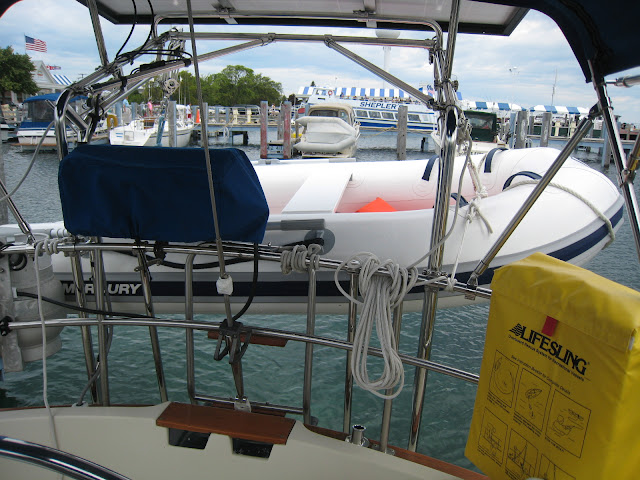 Then we realized we had to get rid of the old dinghy, probably should have thought of that sooner. We sure weren't lugging that around with us for the foreseeable future and it was (a little) too nice to just throw out so we turned to our old standby - Craigslist. We listed it on Sunday morning and that evening a family stopped by and bought it! Faaaaantastic!

Now let's get out of here!
Posted by Skelton Crew at 4:00 AM