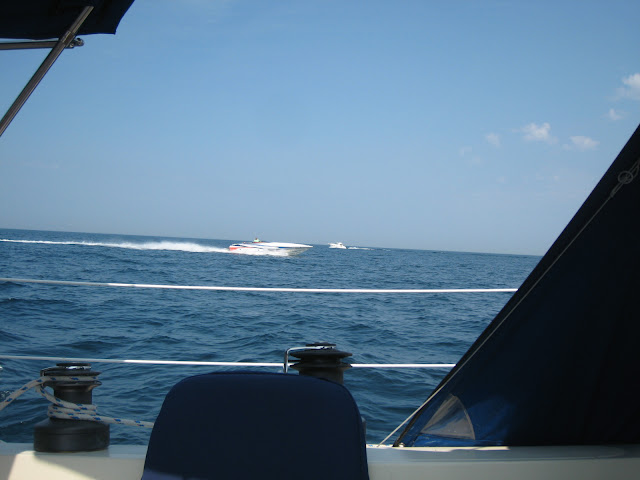 Unbeknownst to us our next destination, Charlevoix, was in the midst of not only an art fair that made the town boom, but also a charity poker run which included dozens of go-fast boats zooming all over. The poker run, in case you were unaware, includes 5 predetermined destinations where participants get a card at each stop. The winner is the one with the best hand in the end so it's not really a race but you can't tell me these people are out blowing big money on fuel for no reason. It's like when there are two (or more) sailboats buddy boating...it's always a race to the next place!

On our way to Charlevoix the boats passed us going south and (way) before we made it there the boats were already on their way back from their 80 mile trip to Traverse City. It was a little loud (which got annoying after a while) but it was a sight to see, tons of boats flying by us, helicopters filming overhead, it was nuts! Then there were tons of spectator boats out watching the run too. The town sure has woken up since our last visit two years ago in early May to bring Hullabaloo home for the first time, that sleepy, quaint little town was now teaming with people and boats. 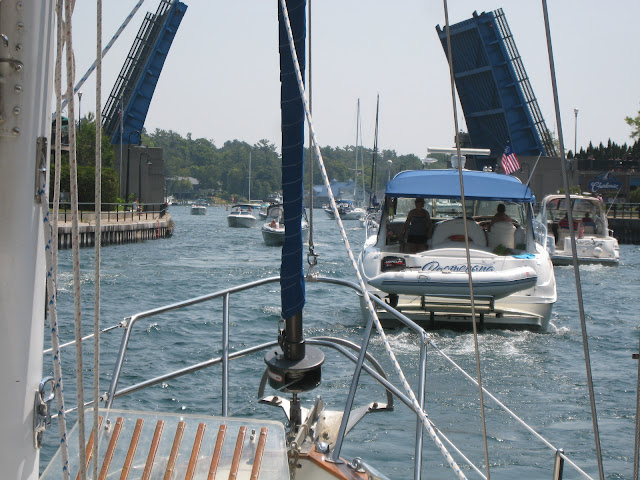 I was pretty nervous going into the channel, trying to time the bridge with all the other boats crammed in and going every which way but Ron seemed pretty calm and comfortable with it. In fact, the most irritating part of it may have been me and my endless  "do you see them?", "watch out for..." and "they're slowing down" comments. But we made it! And when we got into Round Lake we were even more in awe..
We went through Round Lake to Lake Charlevoix to find a place to anchor and ended up just down from Irish Boatshop where we bought the boat. It seemed a little bit full circle at that point and pretty crazy that just over two years ago we were watching her go in the water and feeling like giddy little kids on Christmas morning and now here we are...cruising on her!

Being the people watching addicts that we are we had a blast anchored just down from the boat launch where all the go-fasters were pulling their boats out. Seriously, I think we sat on the deck snacking and people watching for at least 2 hours. Pretty entertaining...yeah, we know how to have a good time ;)