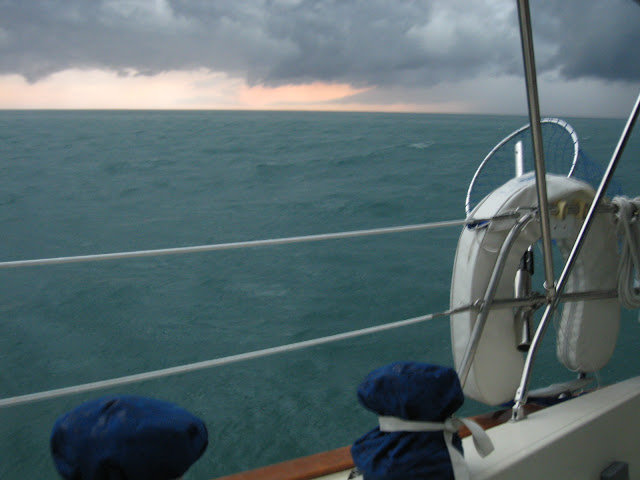 Up to this point we'd never done a night sail. Partly because we were going to try everything in our power to not have to do one and partly because we figured we'd just do it when it became necessary.

We took off yesterday heading East across Erie, trying to make up some miles so we could meet up with Ron's brother this weekend. With limited harbors to stop at, we arrived to our planned stop at 1:30...after a fairly speedy sail thanks to some rain and a cold front pushing us along. Oh, and I got seasick for the first time...joy. You'd think by the time we got to our destination we'd be ready to stop, but I was feeling better and it was still early. We decided that sitting around all afternoon would have been wasted time so we kept going thinking we'd stop at the next harbor. But we didn't, we kept going. The wind had died out as expected so we were motoring and getting pushed by following waves. Not bad.

We thought we'd get into our final destination about 10:00pm. Nothing like a 13hr day, we'd be over it and tired but we'd be there. And that's when things went downhill. We'd had an oil pressure gauge that leaked a little, but not enough to have to put more in at the time, we were just keeping an eye on it for now as Ron had just ordered a new one that was being shipped to his brother's (so we could put it in when we met up with them this week). Well, that small leak became a big one and about 5:30pm our engine temp jumped up. We were heading dead upwind in 4kts. We turned totally off course and put the sails up to give Ron some time to put some oil in and let the engine cool back down. I'm not sure that I can even put into words the feeling that heading totally off course after a long day of sailing gives you. It's a gut punch to the morale to say the least. Especially when you know you still have 30 more miles to go. Not good, the tension sits in your stomach like a rock and if I'm being honest, I even felt a little physically ill from it.
We let the engine cool back down, turned it back on and continued on our way. For two and a half hours everything was good, until it wasn't. The engine goes off, the sails go back up. Except now the winds have picked up to 12kts. Again, we turn off course to get an angle we can tack to and make some tracks in the semi-right direction. By this time it's starting to get dark and we have 13 more miles to go. We just want to get there already! The mood on the boat wasn't good as we sat there in silence.

Then we tacked and actually started making some headway in the somewhat right direction. By this time it was dark and the winds were at a nice 10kts, pushing us along at a manageable 4kts. Morale still sucked, but we could both at least appreciate the peacefulness of sailing at night. The sky was clear, the stars were out and we were sailing. We made it to within 8 miles of our harbor, turned the engine on and b-lined it in. And wouldn't you know it, as we neared the harbor markers there was a massive dredge right in front of it. Ron radioed the dredge and was instructed on how to get around him. Par for the course today. We dropped the hook at exactly 12am. What a day, our short little jump managed to turn into an 80 mile, 16 hour undertaking. Ugh. That sucked.

Although, trying to stay positive here, for as bad as it felt it could have been a lot worse. We could have over heated on our rough crossing back to MI, the wind could have been too much or not enough to have gotten us within a motor-able distance of the harbor, that infamous Lake Erie chop could have kicked up and really made it miserable. Lots more could have happened, but it didn't and we were never physically in danger, just mentally on the edge. It could have been so worse and I'm so very thankful that it wasn't.

Oh yes, we discovered yesterday why cruisers always say that the lifestyle is full of the highest highs and the lowest lows. The good news out of this whole mess it that this last low will only make us appreciate the next high that much more.
Posted by Skelton Crew at 9:49 AM