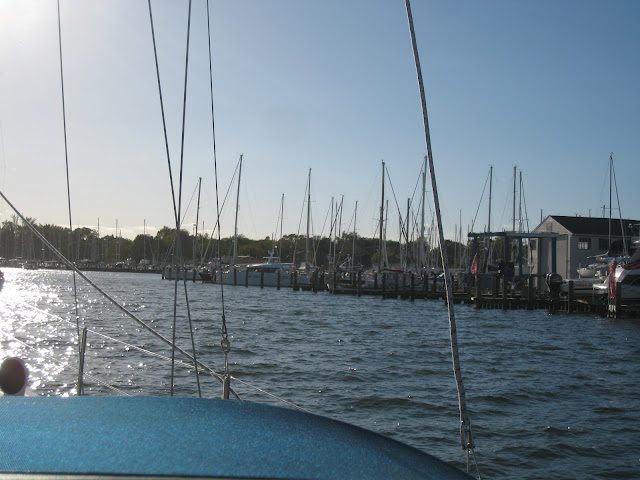 We thought we were getting into Annapolis with plenty of time coming in the Monday before the show, which technically started on Thursday. Nope, not even close. Boats were anchored extremely close and with very short scopes due to the narrow creek. I was pretty okay with there being no room here, I wouldn't have been able to sleep that close without much anchor line out. So we moved a couple miles up to Weems Creek and couldn't have picked a better place to be. Quiet, calm, well protected...yup I could stay here a while, which is exactly what we did.
Then there was this little thing called the Annapolis Boat Show that we went to. It's just the world's largest sail show.
Then we stopped by the Mantus booth, being Mantus Ambassadors, we thought it would be good to stop by and introduce ourselves and boy are we glad we did! We, yet again, connected with another cruising couple that were working the booth and got to meet the owners brother who is in charge of shipping out items ordered. We probably hung out for a good 30 minutes just chatting. Then we started getting freebies tossed our way; T-shirts, a burgee, a bottle opener...they just kept digging stuff out for us. Free stuff aside, we couldn't be happier that we made the decision to go with Mantus for our anchor, especially after meeting some of their staff. Way to go Mantus!

We've met a ridiculous amount of new people here in Annapolis, ridiculous in a good way. To my surprise most of those we've met are, like us, making their way South for the first time but, even more surprising, is the number of "young" cruisers close to our age and even younger that we've run into, much of which you may have seen captured on Facebook. So, you see, despite what you may think, we're not cruising pioneers in the slightest, but, for once, we're a little ahead of the ever increasing trend of pre-retirement cruising. And meeting up with other like-minded trendsetters crazies is a lot of fun! As evidenced by the fact that I have zero pictures of the shenanigans. So.Many.Shenanigans.