After almost two weeks in Weems Creek in Annapolis our anchor was quite litterally starting to become one with the bottom, it took some back and forth maneuvering to get it to pop up from the thick, stinky mud!. But we had a cold snap on the way and with lows in the 30s at night, we were ready to make some miles!

We had a cold, but otherwise nice sail over to a quaint little town called St. Michaels, so cute it almost makes you sick. Fun shops, a brewery and a ton of old historical homes to ogle over, I could have spent more time there but, as I was covered in three to four layers of clothing at any given moment, we pushed on after just one day in the town.


In order to make our departure from St. Michaels easier, we went in the back door, as recommended by several other cruising couples. That way we not only avoided the long trek back around the point, but you also have one of those fabulously protected anchorages the Chesapeake has in spades and a more direct route south. A short dinghy ride to a park and an even shorter 2 block walk (down the cutest street ever) and you'll find yourself smack dab in the town.

From St. Michaels we headed to Solomons Island and had another great anchorage in Mill Creek. It was so calm that I actually thought we were on bottom a couple times, even though we were in 11ft of water. Seriously spoiled.
We checked out the Maritime Museum and had a fantastic time talking with some of the volunteer boat builders/maintainers. I thought for sure Ron would have signed up as a volunteer and we'd never make it out of here. And I'm pretty sure he was back to trying to figure out how to turn the boat into a 'livable woodshop'...for the hundredth time.

The inside exhibits were full of history and artifacts from the early discovery of the area and the oyster, clam and crabbing industries that served as the backbone of a developing local culture.

I have a real weakness for lighthouses, you have no idea how many blurry, grainy pictures I have of the ones we've passed because, even though I know they won't turn out, I just can't help it! So it was awesome to see this big, original beauty sitting pretty much on the dinghy dock as we pulled up. Got me geeked, and I hardly noticed the paint chips raining down as workers scraped the roof from above. 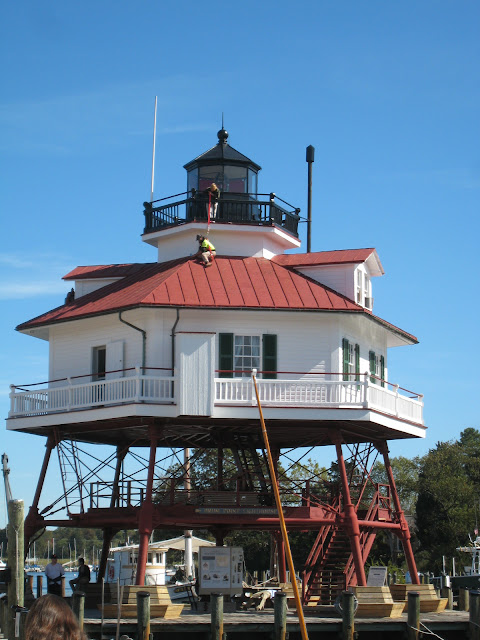 By this time the cold snap had passed and, as you can see, the weather was pretty pleasant, but it won't last much longer and I have zero desire to get caught in any more cold weather like we had so we're trying to keep moving as much as possible while not missing too much. A tricky balance, but I can be comforted by the warmer weather we're hopefully headed into!
Posted by Skelton Crew at 3:00 AM